2013 auction calendar gets off to a flying start 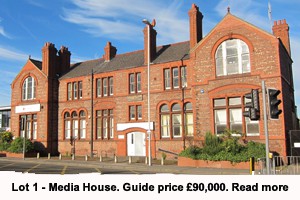 Following on from its success in 2012 Sutton Kersh Auctions has attracted one of the largest catalogues to be offered on Merseyside for over four years.

The leading local auction house will put 103 lots under the gavel from 12 noon on the 14th February at the Liverpool City Centre Marriott Hotel. Wirral Council have entered a portfolio comprising 7 vacant land and commercial sites which include a former Council Depot on Whitfield Road in Heswall guided at £5,000+.

Also listed in the Wirral Council portfolio is Media House on Claughton Road in Birkenhead town centre which will be offered as lot 1. This substantial two storey brick building was formerly a school, and more recently offices. It has an approximate total footprint of 456 m/sq and benefits from 15 off-road car parking spaces to the rear. Subject to obtaining the necessary planning consents the building would be suitable for a number of purposes and is guided at £90,000+.

Cathy Holt, auction manageress at Sutton Kersh commented “2012 was a fantastic year for us. Our total revenue was up by over 35% and total sales up by over 25%. But, like with every good year, we now have to focus on how we recycle that success to deliver even better results in 2013. Attracting one of Merseyside's largest catalogues for over 4 years is a great start.”