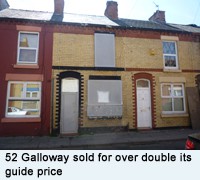 Sutton Kersh is on target to achieve its best auction year end result for over five years. It's recent auction which took place on the 6th September took its total proceeds for the year so far to over £22,000,000 across five auctions – more than it generated across the whole year in 2010 and 2011.

The leading Merseyside auction house offered sixty three properties from an initial catalogue of seventy one at its September auction which took place at the Liverpool City Centre Marriott Hotel. Eight lots were withdrawn, ten sold prior, a further twenty five then sold in the room and five sales have completed afterwards taking total proceeds for the auction so far to £2,795,250 with more sales expect to complete post auction.

The best selling lot of the day was a vacant residential property located at 52 Galloway Street in Wavertree. The mid terraced two bedroomed house which is in need of full refurbishment sold for £24,250 – over double its guide price of £10,000.

Sutton Kersh is now inviting instructions for its 25th October auction. The catalogue will close on the 28th September.