The Bank of England has announced details of a £50bn plan to help prevent the credit crisis causing more damage to the UK banking system and economy. 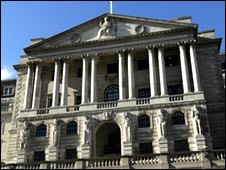 Banks will be able to swap potentially risky mortgage debts for secure government bonds to enable them to operate during the credit squeeze.

The Bank's governor, Mervyn King, said the scheme aimed to improve liquidity in the banking system.

It should also increase confidence in financial markets, he added.

Under the scheme, banks will be allowed to swap their "high quality" mortgage debts for government securities.

The swap scheme, which starts on Monday, will be for a period of one year and may be renewed for a total of three years.

It will only apply to mortgage debts on banks' books at the end of 2007 and the swaps cannot be used to finance new lending.

The central bank anticipates that initial take-up of the scheme will total £50bn but there is no cap on lending.

Protection
Prime Minister Gordon Brown said the scheme was one of a range of measures to protect British workers from the turbulence in America's financial and housing markets.

"We can get markets working again in a way that we can ensure that jobs can be continued, and of course businesses can have the finance they need," Mr Brown said.

Banks welcomed the central bank's "innovative and unique policy response" and said they were confident the move would go some way to free up credit markets.

"The banks are participating in this arrangement and expect it to make a significant contribution to alleviating the pressures in the UK money markets," the British Bankers' Association said.

Beneficial effects
British banks have become increasingly unwilling to make loans, even to each other, as a result of the credit crisis, which was triggered by massive losses for banks involved in the US sub-prime mortgage market.

And many investors, concerned at what happened to sub-prime mortgages in the US, no longer want UK mortgage-based assets.

The disappearance of this market has deprived banks of tens of billions of pounds of finance for mortgage lending.

The move should free up bank balance sheets and enable them to lend more to consumers and home buyers.

However, the Council of Mortgage Lenders said that the liquidity boost would not automatically reverse the recent trend for higher mortgage costs.

"Further details are...awaited on how much of the additional liquidity might be recycled responsibly into mortgage products or pricing," it said.

Bail-out?
The BBC's business editor Robert Peston said the primary purpose of the scheme was to prevent another Northern Rock.

"Or to put it another way, taxpayer support is being provided to minimise the risk of huge future losses for taxpayers from another banking collapse."

"This is a banking market bail-out of an ambition we haven't seen in this country since the early 1970's and possibly longer than that," he said.

But Mr King said the plan ensured that the risk of losses remained with the banks and said those banks taking advantage of the scheme were not being "bailed out" by the taxpayer.

"The banks are now paying a price for what's happened before. They are going through a painful adjustment," he said.

Banks will be required to pay a fee for the swap facility and they will have to provide the Bank of England with assets of greater value than the government bonds they will receive.

Warning
Mr King warned banks against using the government funding to carry out the type of mortgage lending seen in the past, such as 100% mortgages.

"The aim of the scheme is to increase the liquidity of the banking system as a whole. It's not part of this scheme to take us back to the excessive lending of a year or more ago," he said.

Chancellor Alistair Darling, who will address the House of Commons later, said on Sunday the plan was needed to stop the UK's financial crisis worsening.

Vince Cable, the Liberal Democrats' Treasury spokesman, said he had reservations about the idea.

"If the government is going to create this enormous overdraft facility for the banks - essentially what it's doing - it should be linked to changes in the banks' behaviour," he said.

"The banks have got to acknowledge their losses."

Shadow chancellor George Osborne said the move should help to unblock the financial system and help mortgage-holders who need to re-mortgage in the next year or so get a better deal.

Until now, the Bank of England has been more conservative in its financial support for banks than the Federal Reserve in the US and the European Central Bank.

In the US, the Federal Reserve took similar action with a $200bn programme to boost liquidity in financial markets last month.