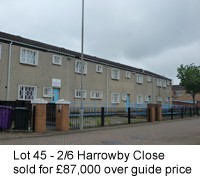 Pre auction activity was particularly high with twenty seven properties sold in the build up for a total of £3,700,000. A further thirty four then sold in the room.

In the auction room the best selling lot of the day was 2/6 Harrowby Close off Granby Street in Toxteth which sold for £87,000 above its guide price. The two storey terrace building comprises five former houses which have been converted into offices and letting rooms and benefit from off road car parking to the rear. The gross internal area is 470.8 sq.m and the total site area is 783 sq.m. Subject to obtaining the necessary planning consents the premises could be converted back to residential use. The lot was guided at £90,000 and sold in the room for £177,000.

Another lot which greatly surpassed its guide price was a former public convenience building on West Derby Road in Tuebrook. The site was offered on the instruction of Liverpool City Council with a guide price of £10,000 and eventually sold in the room for £38,500.

Cathy Holt, auction manageress at Sutton Kersh commented re auction activity was exceptionally high with a fifth of the catalogue selling prior and the viewing diary very busy. The room also attracted a good crowd. I am confident that we will secure a number of deals post auction with some properties falling just short of reaching their reserve price.

“We are delighted with our results from the first half of the year and have received a good number of enquiries about our September auction so I am hopeful we can carry this momentum into our remaining three auctions.”

Sutton Kersh is now inviting instructions for its 6th September auction. The catalogue will close on the 9th August. For a free, no obligation market appraisal contact Sutton Kersh Auctions.