Over £3.9 million raised at April auction 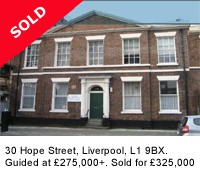 Over £3.9 million raised at April auction

Sutton Kersh sold 75% of the the 88 properties offered at its 3rd April auction to a packed out room at the Liverpool City Centre Marriott Hotel.

Total revenue for the sale currently stands at £3,900,000 which takes Sutton Kersh's total auction sales for the year so far to over £8.5 million with five more sales still to go.

There were a total of 64 properties sold including 11 which were sold prior, 40 then sold in the room, and 13 sales were secured afterwards.

Amongst the sold lots were 2 substantial City Centre properties. 25 Pilgrim Street was offered as the last lot of the day. Guided at £295,000, the student investment property which is currently generating a passing rent of £31,500 per annum, attracted numerous under bidders before selling in the room for £32,5000.

A vacant commercial property on westerly side of Hope Street, close to its junction with Leece Street, also sold in the room for £325,000. Subject to planning from the City Council, the building is suitable for conversion to commercial, residential, or leisure use. The property carried a guide price of £275,000+.

A vacant residential property located at 50 Stanley Park Avenue in Walton sold for more than double its guide price. The 3-bedroom middle town house which is in need of complete modernisation was guided at just £30,000 and sold in the room for £63,000.

3 Picton Grove in Wavertree also sold for over twice its guide price. Guided at just £15,000 - £20,000 the property attracted a flurry of bidding before eventually selling for £43,000.

Cathy Holt, auction manageress at Sutton Kersh comments “It was another good auction. The room was busy and bidding levels were high which resulted in a number of properties selling for significantly over guide. Investors are now seeing an opportunity to purchase a property at levels which will show future capital growth. Price is starting to satisfy demand which is bringing momentum to the market.”

View the full list of results from the April auction here