Sutton Kersh was awarded silver in the Best Small Estate Agency Northern England category at The Estate Agency of the Year Awards in association with The Sunday Times and The Times and sponsored by Zoopla.co.uk. 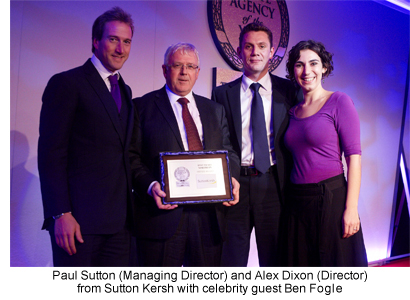 On Thursday 8th December, over 500 leading estate agents and conveyancing lawyers descended upon The Lancaster London Hotel opposite Hyde Park for The Estate Agency of The Year Awards ceremony. The winners received their awards from celebrity guest, Ben Fogle who charmed the audience with some inspiring tales of his adventures.

The awards ceremony was the culminating event of a rigorous and thorough judging process carried out over a four month period by a panel of industry experts who assessed initial entry submissions before conducting an extensive review of the entrants which included hundreds of telephone interviews and mystery shopping exercises. The whole judging process was overseen by The Property Ombudsman; Christopher Hamer.

For the past nine years, the awards have become increasingly competitive with the standard of entries rising ever higher. These awards are firmly established as the most sought-after and difficult to win in estate agency. Over 5,000 offices were represented this year, but only the very best of the best were crowned as winners.

Sutton Kersh winners of the Best Small Estate Agency Chain North of England were delighted to receive the award.  James Kersh, director at Sutton Kersh commented "We are absolutely delighted to have been awarded at The Estate Agency of the Year Awards. Sutton Kersh started out as a family business with a single estate agency and chartered surveying practice in 1976 and has maintained its independence; something we take great pride in. To be recognised as being in the top two small estate agency chains in the North of England by a panel of industry experts is a real honour for the firm and something we are all incredibly proud of.  The award provides great motivation to our team and we will look to build on this success in the year ahead."

The expert panel of judges described Sutton Kersh as being "completely focused on what sellers need, with a real focus on sales progression" and "taking a family business with traditional values and adding top notch technology and systems to ensure clients get the best of both worlds".

A ful list of the awards, photographs from the event and the judges comments can be found at www.estateagencyoftheyear.com.

Peter Knight, Chairman of the event organisers Estate Agency Events commented "At a time when the property market throughout much of the UK continues to struggle, choosing the right estate agent has never been more pertinent. The winners of these awards represent the top 10% of an industry where standards are hugely variable. Consumers should have confidence that a firm displaying a winner’s medal from these awards are a cut above the rest."

The main awards were sponsored by Zoopla.co.uk, the UK’s most comprehensive property website whilst the specialist categories were sponsored by some of the industry’s leading suppliers including Audio Agent, ARPM, Clear Conveyancing, FWBS, Key Agent, Law Firm Services, Moneypenny, Mortgage Talk, MoveWithUs, MyHomeMove, Ravensworth, Reapit, Roomservice by CORT and WhatHouse.co.uk