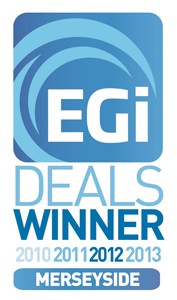 The Liverpool based independent commercial property agent, which is part of the Sutton Kersh Group, has been awarded the title of ‘EGi Deals Winner for Merseyside’ for 2013, repeating similar success in 2010, 2011 and 2012.

Jonathan Owen, Director of Commercial Agency at Sutton Kersh said: ‘It is a fantastic achievement to win this award for the fourth year running and reflects the hard work and dedication of our professional team.

‘It also shows our resilience and flexibility, which has enabled us to adapt and prosper during what have been challenging trading conditions for the industry.’

Sutton Kersh Commercial specialises in the disposal of commercial property including retail, office and industrial premises, investments, land and development sites. They also advise on new developments, acquisitions, investments and a range of property related matters.

They are actively involved in projects throughout the North West of England, the Midlands, North Wales and Merseyside.