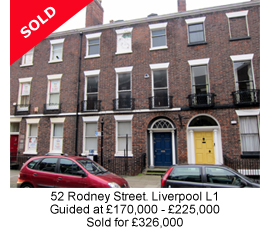 The event took place on the 8th December at the Marriott Hotel in Liverpool City Centre and was well attended.

Pre auction activity was the highest it has been all year with 13 properties selling for a total exceeding £1,000,000 including The Old Barn Pub.  A further 23 properties sold in the room and more deals are in the pipeline.

A commercial investment on Allerton Road currently let to national estate agency chain Sequence Ltd for a passing rent of £25,500 was guided at £300,000 and sold in the room for £332,000.

A former resource centre on Huyton Church Road in Huyton sold for £80,000 above its guide price following competitive bidding from numerous underbidders. The vacant commercial redevelopment opportunity, which is suitable for a variety of uses subject to the necessary planning consents, was guided at £120,000 - £130,000 and sold for £201,000.

This was the seventh auction held by the leading Merseyside auction house this year. Their total receipts for the year amount to 339 properties and over £20,000,000 in revenue.

James Kersh, director at Sutton Kersh comments "We are extremely pleased with the results we have achieved this year. Amidst a very tough economic climate we have achieved a selling average that exceeds the national average and generated over twenty million pounds worth of sales. The atmosphere in the auction room at the final two sales was particularly encouraging with a great buzz amongst investors and competitive bidding.

"Whilst interest rates remain low, and there has been speculation that these historically low rates may remain for another three years, investors are capitalising on the many cheap deals currently available and are recognising the opportunities the property market offers for long term capital growth."

It was day for double celebrations for Sutton Kersh; after completing their auction calendar and maintaining their position as the best performing auction house in Merseyside for the fifth consecutive year,  they received confirmation of their silver award at The Estate Agency of the Year Awards for Best Small Estate Agency Chain in the North of England.

The event, which was organised by Estate Agency Events and sponsored by the property portal Zoopla, took place at the London Lancaster Hotel and was hosted by guest celebrity Ben Fogle.

Sutton Kersh was described by the judges as being "completely focused on what sellers need, with a real focus on sales progression” and  “taking a family business with traditional values and adding top notch technology and systems to ensure clients get the best of both worlds".

James Kersh continues "It is a real honour to have been awarded at The Estate Agency of the Year Awards and is a credit to our hardworking team. We now look to build on this success in the year ahead."