At the end of November, Liverpool is to become the temporary home to a colony of penguins. More than 100 six-foot birds will decorate the city in the build up to Christmas as part of a public art trail that is set to rival the Go Superlambananas event that proved to be a huge success in 2008. 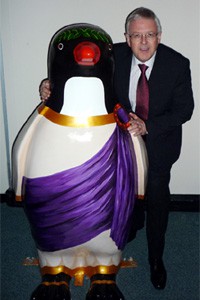 Sutton Kersh was the official auction house for the Go Superlamabananas event that raised a record breaking £600,000+ for the Lord Mayor's Charities Appeal. After being provided with a sneak preview of the fantastic looking penguin sculptures, Sutton Kersh has offered its support to Go Penguins and the eco-friendly campaign the event delivers through sponsoring the Emperor Penguin.

Sutton Kersh's penguin will nest in Exchange Flags. The comical looking statue will stand out from the suited crowd of professionals in the busy business district dressed in a full toga.

The Go Penguins event is being commissioned by the Culture Company and organised by Wild In Art. It is based around a story, written by former Culture Company vice-chairman Phil Redmond, in which a penguin called Patrick is rescued from the ocean by HMS Liverpool.

Paul Sutton, managing director at Sutton Kersh comments, "The penguins look fantastic! We are delighted to be involved with the project that will bring vast enjoyment and entertainment to communities all over Liverpool. Deciding on which penguin to sponsor was perhaps one of the hardest decisions I have had to make this year – they really are superb and the artists and organisers have done a great job once again. I am certain that Liverpool is going to adore them and that the project will be as successful, if not more so, than the Go Superlambanana event."

The penguins will be on the streets of Liverpool from the 22nd November. Visit www.gopenguins.co.uk for more information. Remember to visit Exchange Flags and introduce yourself to our Emperor Penguin, Theo!