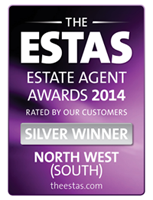 Sutton Kersh has scooped a major award at the prestigious Estate & Letting Agent Awards (the ESTAS), which recognises exceptional levels of customer service.

The agent, who has three dedicated sales offices in Allerton, West Derby and Liverpool city centre, received the Silver award for a second consecutive year in the Best Estate Agent in North West (South) region which covers Merseyside, Cheshire and Greater Manchester.

The awards, now in their 11th year, determine the best estate agents in the country through research carried out amongst customers who are asked a series of questions about the service they have received from their agent. In total 32,000 questionnaires were completed by customers during this year’s competition.

James Kersh, Managing Director of Sutton Kersh said: ‘We are absolutely delighted that our high levels of customer service have once again been recognised at this year’s ESTAS.

‘We have always believed that the service our team provides sets us apart from the competition, so this award is a massive endorsement of the way we do business by the most important people of all, our customers.’

The award, sponsored by Zoopla Property Group, was presented to representatives from Sutton Kersh by Phil Spencer, the TV property expert, at a lavish luncheon and ceremony at the Hilton Park Lane London, attended by 700 of the UK’s top estate and letting agents and suppliers to the industry.