Sutton Kersh; the all rounders

Sutton Kersh have reinforced their reputation as a good all-rounder by winning a charity rounders tournament that brought together many of the city's top property agents, developers, solicitors and finance companies in aid of Zoe's Place Baby Hospice. 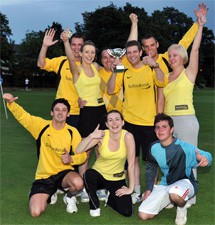 The tournament took place on Wednesday 23rd July at Liverpool Cricket Club, a venue that was recently the victim of a suspected arson attack. In true 'the show must go on' style a marquee was erected and the tournament went ahead with no sign of any disruption.

The competition commenced with a group stage. The teams were split in to four groups comprising three teams in each. Downing, Knight Frank and Your Move battled it out on pitch one and finished up in a three way tie with Downing coming out on top after counting up the number of rounders scored overall. Sutton Kersh slogged their way to victory on pitch two with wins over King Sturge and Venmore. Keppie Massie took two of the cities major soliciting firms to the cleaners on pitch three, triumphing over DWF and Brabners. Pitch four hosted the final group on which included Ashbury Homes proved to be too good for GB Finance and Belvoir.

Sutton Kersh were the eventual tournament winners beating Ashbury Homes by 12 rounders to 7½ in an excellent final that was well supported. James Kersh, director of Sutton Kersh and sponsor of the rounders tournament comments "The evening was a great success. We raised a good amount of money for Zoe's Place and everyone seemed to really enjoy it. It wasn't a fix! Team practice took the form of smacking a squash ball round our office with a piece of wood an hour before the tournament... that I had to put to a stop after two hits due to health and safety. I hope any aching that was felt the following day hasn't deterred any teams from wanting to play again next year; we'd like to make this an annual event and retain our title."

The tournament raised over £550 for Zoe's Place Baby Hospice.