The Bank of England has cut interest rates to 0.5% - a fresh all-time low - and says it will now boost the money supply to help revive the economy. 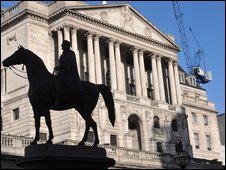 Interest rates have now been reduced six times since October, and the latest half a percentage point cut from January's 1% had been expected.

The Bank said it would expand the amount of money in the system by £75bn in an attempt to boost bank lending.

This policy, so far untried in the UK, is called quantitative easing.

Buying assets
Quantitative easing is the process of increasing the amount of money in circulation in an attempt to revive the economy.

While the Bank will initially add £75bn, Chancellor Alistair Darling has given it permission to extend this to up to £150bn.

The idea is that if the amount of money in the system is boosted, commercial banks will find it easier to lend.

Quantitative easing is sometimes incorrectly referred to as printing money, but the Bank will not expand the supply of money by making new banknotes.

Instead, it will buy assets - such as government securities (gilts) and corporate bonds.

Similar measures were implemented in Japan at the beginning of the decade and are considered to have had limited success.

'Pleasantly surprised'
BBC economics editor Stephanie Flanders said that while the initial size of the quantitative easing scheme was smaller than some analysts had expected, "it's a lot more than dipping their toes in the water".

"Those who feared that the Bank would defeat the purpose of the policy by doing it only half-heartedly may be pleasantly surprised," she said.

Philip Shaw, chief economist at Investec, said that quantitative easing "should in principle encourage the banks to lend to private sector agents such as households and businesses, stocking monetary growth and stimulating activity".

Mervyn King, the Bank's Governor, sought permission from the Chancellor to start quantitative easing in a letter on 17 February.

In his reply, Mr Darling said that in the "current circumstances" the measures were now "appropriate".

oth letters were released on Thursday.

Others argue that they are unfairly hurting the returns of savers.

"Today's decision is a kick in the teeth for savers who will see their already diminished interest payments fall even further," said Adrian Coles, director general of the Building Societies Association.

The Council of Mortgage Lenders (CML) said the latest cut would be a "double whammy for prospective mortgage borrowers".

"Savings are the lifeblood of mortgage lending, and unless lenders can offer competitive rates to savers their ability to offer new mortgages is restricted."

Ian McCafferty, CBI chief economist, said the continuing rate cuts were "becoming less and less effective as a means of stimulating the economy".

"Though this latest cut will help support business and consumer confidence, it is unlikely to have a dramatic impact on the cost or availability of credit," he said.

The Bank has had the room to cut interest rates because inflation has fallen on the back of reduced energy costs.

The most recent official figures showed that consumer prices index (CPI) inflation fell for the fourth month in succession in January to 3%, from December's 3.1%.

However, CPI inflation still remains above the government's 2% target.